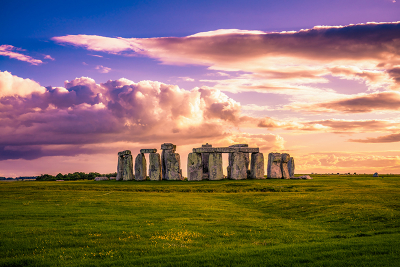 The ancient stone circle at Stonehenge in the UK has been of fascination for us and our ancestors for around 5000 years. Now, we wonder at how the vast stones were transported to the henge and erected. In the past, the fascination was with the movement of the Sun and the passing of the seasons. It has been known for some years that the smaller “bluestones” came from the Preseli Hills in Wales. However, larger (up to 7 m) and heavier (20 tonnes) stones, known as sarsens, are also used at Stonehenge, and the origin of these—more homogeneous in composition—has been impossible to identify until now.

A paper in Science Advances reports a study that has pinpointed the source of the sarsens to an area around 15 miles north of the stone circle site. The breakthrough came when a core—drilled from Stonehenge’s “Stone 58” during repair work in the 1950s—was returned to English Heritage from Florida last year. This was at the request of one of those involved at the time, Mr Robert Phillips. This presented a unique opportunity to analyse the interior of one of the sarsens with destructive techniques.

The team first carried out non-destructive testing of all the remaining sarsens at Stonehenge using portable x-ray fluorescence spectrometry (pXRF). This revealed that most, including Stone 58, shared a similar chemistry and came from the same area. They then analysed sarsen outcrops from across the south of the UK using inductively coupled plasma mass spectrometry (ICP-MS) and ICP-atomic emission spectrometry (ICP-AES). The return of the core drilled from Stone 58 in the 1950s offered the opportunity to perform destructive analysis as well using ICP-MS and ICP-AES, and to compare this with the compositions of a number of stones from possible sources around the country. This showed that the composition of Stone 58 matched the chemistry of sarsens at West Woods, just south of Marlborough: about 40 minutes drive from Stonehenge today.

English Heritage Senior Properties Historian Susan Greaney said: “To be able to pinpoint the area that Stonehenge’s builders used to source their materials around 2500 BC is a real thrill. Now we can start to understand the route they might have travelled and add another piece to the puzzle. While we had our suspicions that Stonehenge’s sarsens came from the Marlborough Downs, we didn’t know for sure, and with areas of sarsens across Wiltshire, the stones could have come from anywhere. We can now say, when sourcing the sarsens, the over-riding objective was size—they wanted the biggest, most substantial stones they could find and it made sense to get them from as nearby as possible. This is in stark contrast to the source of the bluestones, where something quite different—a sacred connection to these mountains perhaps—was at play. Yet again this evidence highlights just how carefully considered and deliberate the building of this phase of Stonehenge was.”

Professor David Nash, University of Brighton, said: “It has been really exciting to harness 21st century science to understand the Neolithic past, and finally answer a question that archaeologists have been debating for centuries. We were able to investigate the chemistry of the sarsens at Stonehenge using x-ray fluorescence, a non-destructive technique. This showed that most of the stones shared a similar chemistry and likely came from a similar source. We then applied mass spectroscopy to samples from sarsen outcrops across southern England and to tiny pieces of the Phillips’ Core from Stonehenge. Each outcrop was found to have a different geochemical signature, but it was the chance to test the returned core that enabled us to determine the source area for the Stonehenge sarsens. We’re incredibly grateful to the Phillips family for returning the core to us.”

Multi-element analysis of drinking water
6 May 2022