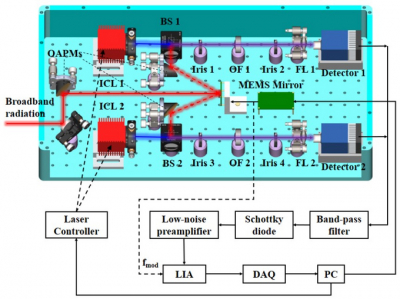 Recently, a research team led by Professor GAO Xiaoming from Anhui Institute of Optics and Fine Mechanics, Hefei Institutes of Physical Science of Chinese Academy of Sciences developed a new type of spectrometer which is capable of simultaneous remote sensing of atmospheric methane (CH4), water vapour (H2O) and nitrous oxide (N2O). In the mid-infrared band, due to the lack of mature optical fibre components or optical waveguides, traditional mechanical choppers are usually used to modulate sunlight, and it’s difficult to miniaturise the system. In order to solve this problem, scientists developed this novel spectrometer. It is called a modulator-based dual-channel mid-infrared laser heterodyne radiometer (MIR-LHR), and is based on a micro-electro-mechanical system (MEMS) modulator.

They obtained the laser heterodyne spectra of Hefei, China by inversion calculations. According to the experiment, the volume mixing ratios of CH4, H2O and N2O were tested as ~1.906 ppm, ~3069 ppm and ~338 ppb, respectively. The results were in good agreement with simulation spectra from atmospheric transmission modelling.