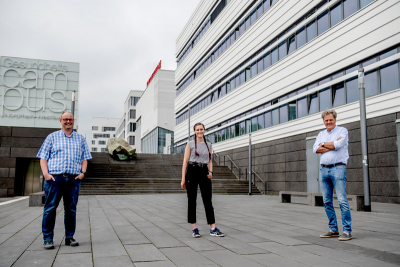 Lung tumours are divided into various types, such as small cell lung cancer, adenocarcinoma and squamous cell carcinoma. Many rare tumour types and sub-types also exist. This diversity hampers reliable rapid diagnostic methods in everyday clinical practice. In addition to histological typing, the tumour samples also need to be comprehensively examined for certain changes at a DNA level. “Detecting one of these mutations is important key information that influences both the prognosis and further therapeutic decisions”, says co-author Professor Reinhard Büttner, head of the Institute of General Pathology and Pathological Anatomy at University Hospital Cologne.

Patients with lung cancer clearly benefit when the driver mutations have previously been characterised: for instance, tumours with activating mutations in the EGFR (epidermal growth factor) gene often respond well to tyrosine kinase inhibitors, whereas non-EGFR-mutated tumours or tumours with other mutations, such as KRAS, do not respond at all to this medication. The differential diagnosis of lung cancer previously took place with immunohistochemical staining of tissue samples and a subsequent extensive genetic analysis to determine the mutation.

The potential of infrared imaging as a diagnostic tool to classify tissue, called label-free digital pathology, has already been shown by the group led by Klaus Gerwert in previous studies. The procedure identifies cancerous tissue without prior staining or other markings and functions automatically with the aid of artificial intelligence (AI). In contrast to the methods used to determine tumour shape and mutations in tumour tissue in everyday clinical practice, which can sometimes take several days, the new procedure only takes around half an hour. In that time it is not only possible to ascertain whether the tissue sample contains tumour cells, but also what type of tumour it is and whether it contains a certain mutation.

The Bochum researchers were able to verify the procedure on samples from over 200 lung cancer patients. When identifying mutations, they concentrated on by far the most common lung tumour, adenocarcinoma, which accounts for over 50 % of tumours. Its most common genetic mutations can be determined with a sensitivity and specificity of 95 % compared to laborious genetic analysis. “For the first time, we were able to identify spectral markers that allow for a spatially resolved distinction between various molecular conditions in lung tumours”, explains Nina Goertzen from PRODI. A single IR spectroscopic measurement offers information about the sample which would otherwise require several time-consuming procedures.

Read the original journal paper in The American Journal of Pathology