While ordinary materials are usually either magnetically or electrically ordered, a relatively new class of materials of so-called multiferroics has been discovered that exhibits magnetic and electrical (and eventually also mechanical) ordering simultaneously. The unique and fascinating feature of these systems is that both phenomena are coupled and that electric forces may be used to control the magnetic structure and vice versa.

Unfortunately, most systems that have been investigated so far exhibit these extraordinary properties only at low temperatures. In view of possible applications in information technology, sensor technology etc., it is, therefore, a crucial task to increase the temperature range of multiferroics. Since the exact mechanism of spin coupling with the movement of ions and the resulting electric dipole moment is still not fully understood, detailed experimental and theoretical studies are needed which require advanced techniques like high-resolution Raman spectroscopy with suitable laser sources.

One particular interesting system is MnWO4, in which the Mn2+ is the only magnetic ion. Its magnetic phase diagram is rather complex and exhibits two different antiferromagnetic phases, below TK = 6.8 K and between TC = 12.3 K < T < TN = 13.2 K, respectively. In the intermediate multiferroic phase between TK and TC the spins are no longer antiferromagnetically aligned but form a cycloidal wave along a certain crystallographic direction. The stabilising interactions between different spins are mediated by the diamagnetic oxygen ions by the magnetic super-exchange. Additionally, a force is exerted on the oxygen ions so that they are displaced from their normal position. In consequence, an electric dipole moment is generated and the crystal becomes ferroelectric. The electro-magnetic coupling is usually described by the “inverse Dzyaloshinskii–Moriya” interaction.

Variation of magnetic interaction is a key tool to investigate the electromagnetic behaviour of such complex systems. This can be done by doping the crystal with other ions. For example, it is possible to replace some manganese ions by non-magnetic ions which leads to a decrease of the magnetic interaction and, hence, to a reduction of the stability region of the multiferroic phase. On the other hand, the variation of non-magnetic ions can help to increase the ion displacements and the spin-induced electric dipole moments which lead to an enhanced multiferroic regime. In the present study, we replace tungsten by molybdenum and characterise the structural, dielectric and spectroscopic properties of the mixed system MnWO4–MnMoO4.

Lattice vibrations reflect details of local interatomic interactions. Hence, Raman spectroscopy is a powerful tool to investigate the effect of ion doping on the spin-oxygen coupling. In a previous publication,1 we were able to demonstrate that there is an unusual strong temperature dependence of the W–O stretching vibration within the WO6 octahedra. Using the green line of an Ar+-ion laser with a wavelength λ = 514.532 nm, a shift of 0.3 cm–1 of this 884.4 cm–1 mode could be detected within the rather small temperature interval of the multiferroic phase (5.5 K). Variations of the magnetic interactions by Mo-doping can, therefore, be monitored by frequency shifts of this particular lattice mode.

The replacement of the tungsten ions by molybdenum ions is rather challenging and needs a multistep chemical solid-state process.2,3 After mixing the pure components, MnWO4 and MnMoO4, several cycles of ball-milling, pellet-pressing, temperature-cycling and final sintering were applied in order to produce well-defined samples of a series of compositions of MnW1 – xMoxO4 with 0 < x < 1. Even if both pure compounds belong to the same space group P2/m and exhibit only small differences in their lattice parameters, they differ considerably in the coordination of oxygen ions. While in MnWO4 (wolframite), tungsten is six-fold coordinated by oxygen, forming WO6-octahedra, molybdenum in MnMoO4 is four-fold coordinated and MoO4-tetrahedra are the corresponding building blocks. As a consequence, there is a limited miscibility with a pronounced gap between x = 0.3 and x = 0.65. The exact extension is still under discussion in the literature and seems to depend on the type of preparation. The samples investigated in the present study are, therefore, characterised by X-ray powder diffraction as shown in Figure 1. 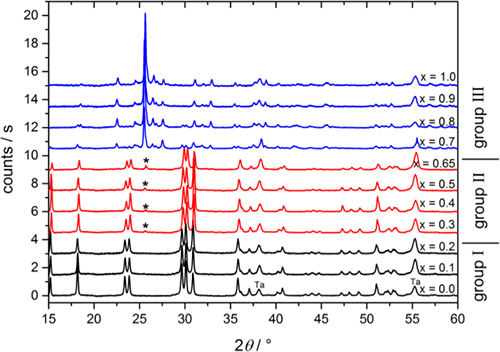 There are three concentration regimes which can clearly be distinguished:

More detailed information about the variation of interatomic interactions can be obtained by Raman spectroscopy. Unlike the previous study on pure MnWO4, however, the mixed crystalline system cannot be investigated using the standard argon laser since the molybdenum content makes the sample entirely opaque and strongly absorbs green light.

As a consequence, a green laser is inappropriate for this system and a red one must be preferred. In Raman spectroscopy, fundamental conditions of the exciting light are long-time stability as well as a narrow bandwidth of about 0.01 cm–1. Hence, we used a novel solid-state red laser Solo640 (UNIKLASERS), which meets these requirements very well. This laser has a wavelength of λ = 640 nm and a maximum power of 500 mW (at the sample, 10 mW are applied).

Figure 2 displays concentration dependent spectra for two ranges of wavenumbers. Again, the three concentration groups can be distinguished well as demonstrated by the colour-coded spectra.

Figure 2. Raman spectra of sintered MnW1 – xMoxO4 samples with different concentrations. The three concentration regimes are distinguished by different colours. The intensities are normalised with respect to the Ag4-mode at 327 cm–1.

Of particular interest is the concentration dependence of the internal stretching vibration of the oxygen-polyhedron between 850 cm–1 and 950 cm–1. With increasing Mo-content, the well-defined WO6-vibration at 884.4 cm–1 gets weaker and another mode at 850 cm–1 is observed with growing intensity which can be attributed to the molybdenum substitution at the centre of the oxygen-octahedra. In the concentration regime of the molybdate-phase (blue spectra), the Raman spectrum is split into several bands which correspond to different types of stretching vibrations in the MoO42–-tetrahedra. The external vibration at lower wavenumbers shown on the left-hand side of Figure 2 confirm the impression that up to x = 0.65, the features of the tungstate-phase are retained with some modifications due to the Mo-doping. Only beyond x = 0.7 the modes of the molybdate-phase dominate and the wolframite modes are strongly reduced in particular.

The effect of molybdenum doping on the multiferroic phase transition is reflected by the temperature dependence of the real part of the dielectric permittivity ε′ shown in Figure 3 as obtained by dielectric impedance spectroscopy. The well-defined peak indicates the Curie-temperatures TC, where the multiferroic phase is entered on cooling associated with a spontaneous electric polarisation. With increasing molybdenum concentration, TC increases significantly and the multiferroic phase is stabilised at higher temperatures. The dielectric loss peak can still be observed for molybdenum concentrations up to x = 0.5 even if the intensity decreases gradually. After an almost linear behaviour of TC(x) for lower concentrations just as observed by Hardy et al.,4 there is a saturation near x = 0.35 at TC = 14.7 K more than 2 K higher than for pure MnWO4.

Figure 3. Left: temperature dependence of the real part of the dielectric permittivity of MnW1 – xMoxO4 for different compositions. Right: concentration dependence of TC. Open symbols are datapoints from Reference 4.

The results of the present study indicate, in fact, that partial substitution of ions leads to an extended temperature range of the multiferroic phase. The key feature is the modification and strengthening of the super-exchange interaction between the magnetic ions mediated by oxygen. Understanding the underlying processes on the atomic level is crucial for possible applications and for the development of new materials with exciting properties.

Four Generations of Quality: a spectroscopic trio
20 May 2022