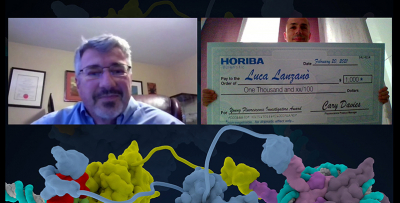 HORIBA Scientific has presented Dr Luca Lanzano with the annual Young Fluorescence Investigator Award at the virtual Biophysical Society virtual event. Dr Lanzano is an Associate Professor of Applied Physics in the department of Physics and Astronomy “E. Majorana”, at the University of Catania. The winner was selected by the Biological Fluorescence Subgroup of the Biophysical Society. Along with the recognition, HORIBA presented a $1000 cheque to Dr Lanzano and a crystal award.

Since March 2020, Dr Lanzano has been an Associate Professor of Applied Physics at the Department of Physics and Astronomy, University of Catania. He worked as a Post-Doctoral fellow from 2008 to 2013 at the University of California at Irvine, in the Laboratory for Fluorescence Dynamics. He developed fluorescence microscopy- and spectroscopy-based methods to measure protein dynamics and interactions in live cells. In 2013 he joined the Nanoscopy group at the Istituto Italiano di Tecnologia in Genoa, where he developed new super-resolution imaging techniques and novel image analysis tools, and was appointed a researcher in 2018.

HORIBA Scientific has been the sole sponsor of this award since 1997. The Young Fluorescence Investigator Award is presented to a researcher who has been nominated by their peers for significant advancements and/or contributions in or using fluorescence methodologies. The candidate must be a PhD, and a pre-tenured faculty member or a junior level investigator working in the field of fluorescence.

“HORIBA is very proud to sponsor this prestigious award again this year, and Dr Lanzano is an excellent choice as this year’s recipient for his work in super resolution fluorescence microscopy”, said Cary Davies, Director of the Fluorescence group at HORIBA Scientific. “Lanzano is the 26th researcher to win the Young Investigator Award since 1997.”