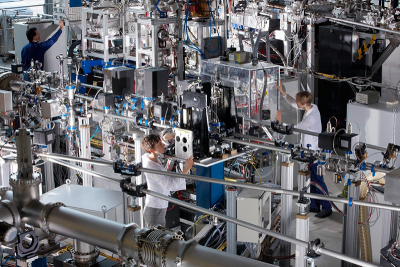 Using a new method, physicists from TU Freiberg, in cooperation with researchers from Berkeley and Hamburg, are for the first time analysing at the femtosecond scale the processes in a model system for organic solar cells. This can be used to develop high-performance and efficient solar cells.

The key are the ultra-fast flashes of light, with which the team led by Dr Friedrich Roth works at FLASH in Hamburg, the world’s first free-electron laser in the X-ray region. “We took advantage of the special properties of this X-ray source and expanded them with time-resolved X-ray photoemission spectroscopy (TR-XPS). This method is based on the external photoelectric effect, for the explanation of which Albert Einstein received the Nobel Prize in Physics in 1921. “For the first time, we were able to directly analyse the specific charge separation and subsequent processes when light hits a model system such as an organic solar cell. We were also able to determine the efficiency of the charge separation in real-time”, explains Dr Roth from the Institute of Experimental Physics at TU Bergakademie Freiberg.

In contrast to previous methods, the researchers were able to identify a previously unobserved channel for charge separation. “With our measurement method, we can carry out a time-resolved, atom-specific analysis. This gives us a fingerprint that can be assigned to the associated molecule. We can see when the electrons energised by the optical laser arrive at the acceptor molecule, how long they stay and when or how they disappear again”, says Prof. Serguei Molodtsov. He heads the research group “Structural Research with X-ray Free Electron Lasers (XFELs) and Synchrotron Radiation” at the Freiberg Institute of Experimental Physics and is a Scientific Director at the European X-ray Free Electron Laser (EuXFEL).

Real-time analysis and the measurement of internal parameters are important aspects of basic research that the solar industry, in particular, can benefit from. “With our measurements, we draw important conclusions about the interfaces at which free charge carriers are formed or lost and thus weaken the performance of solar cells”, adds Dr Roth. With the findings of the Freiberg researchers, for example, optimisation possibilities at the molecular level or in the field of materials science can be derived and quantum efficiency optimise newly emerging photovoltaic and photocatalytic systems. The quantum efficiency describes the ratio of the incident light to the photon stream (current that is generated).