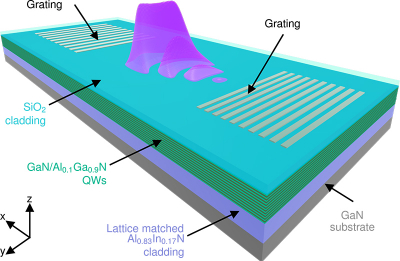 The field of ultrafast non-linear photonics has become the focus of numerous studies, as it enables a host of applications in advanced on-chip spectroscopy and information processing. The latter, in particular, requires a strongly intensity-dependent optical refractive index that can modulate optical pulses faster than even picosecond timescales and on sub-millimetre scales suitable for integrated photonics.

Despite the tremendous progress made in this field, there is currently no platform providing such features for the ultraviolet (UV) spectral range, which is where broadband spectra generated by non-linear modulation can be used for new on-chip ultrafast chemical and biochemical spectroscopy devices. Now, an international team of scientists have achieved giant non-linearity of UV hybrid light-matter states (“exciton-polaritons”) up to room temperature in a waveguide made of AlInGaN, a wide bandgap semiconductor material behind the solid-state lighting technology (e.g. white LEDs) and blue laser diodes. The study is a collaboration between the University of Sheffield, ITMO Saint Petersburg, Chalmers University of Technology, the University of Iceland and the LASPE at Ecole Polytechnique Federale de Lausanne’s Institute of Physics of the School of Basic Sciences.

The scientists used a compact 100 mm-long device, to measure an ultrafast non-linear spectral broadening of UV pulses with a nonlinearity 1000× larger than that observed in common UV non-linear materials, which is comparable to non-UV polariton devices. Using AlInGaN is a significant step toward a new generation of integrated UV non-linear light sources for advanced spectroscopy and measurement. “The AlInGaN system is a highly robust and mature semiconductor platform that shows strong excitonic optical transitions up to room temperature in the UV spectral range”, says EPFL’s Raphaël Butté, who worked on the study.

The authors state: “The non-linear exciton interactions in our system are comparable to those in other polariton material systems, such as GaAs and perovskites, which, however, do not simultaneously operate in the UV and up to room temperature.”