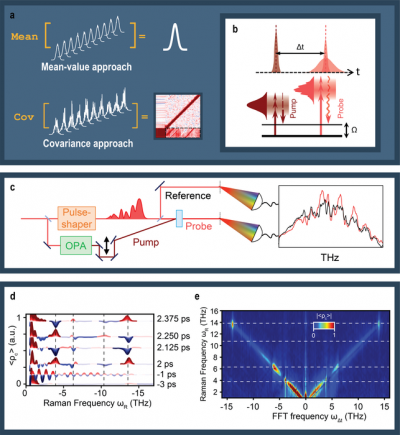 Over the last several decades, ultrafast spectroscopic techniques have played a key and growing role in scientific discoveries in physics, materials science, biology and chemistry, while also proving useful in application-driven projects and device manufacture and characterisation. While the experimental techniques have matured in many ways, they still largely share some key philosophical features: they rely on “well behaved” laser pulses (i.e. as stable as possible); and on integrating or averaging many measurements to reduce the experimental noise to acceptable levels where necessary. These characteristics lead to complicated experimental setups, and expensive lasers which typically are limited to lab-based environments with large space requirements.

A team of scientists, from Italy, USA and Australia demonstrated that a fundamentally different approach which benefits from “badly behaved” pulses (i.e. noisy) can retrieve the spectroscopic signal. The team led by Professor Daniele Fausti from the University of Trieste and Elettra Sincrotrone Trieste S.c.p.a., Professor Shaul Mukamel from the University of California, Irvine, and Dr Jonathan Tollerud from Swinburne University, Melbourne, developed a new ultrafast spectroscopy technique, which instead of making the pulses more stable, utilizes noisy pulses and a correlation-based approach for signal detection. In this new framework, the sample is driven out of equilibrium, and then probed with pulses that are deliberately made “poorly behaved” and display randomised pulse-to-pulse fluctuations in time and frequency. Information from the out-of-equilibrium sample is then encoded into these noisy pulses through non-linear interaction of the light with the material and retrieved by single shot acquisitions.

“The Eureka of my PhD project was realising that every realisation of the experiment is unique and, therefore, measuring the average over many repeated experiments doesn’t tell you the full story”, says Giorgia Sparapassi from Elettra Sincrotrone Trieste S.c.p.a.. To put it simply, it is common in pump and probe experiments to repeat the measurements thousands of times per second so that one can measure even the tiniest changes of the reflectivity or transmissivity in the sample. But it is important to realise that in mean-value-based approaches it is implicitly assumed that all measurements are performed under unchanged conditions, while in truth, each realisation of the experiment is subtly different. “Realising that the subtle difference between different realisations of the same experiments carry a whole load of information which you miss if you measure the response averaged over many repetitions was the starting point of this research line”, says Professor Fausti who led the project.

In a recent paper, the authors have brought this concept to time domain spectroscopies and shown that vibrational modes of quartz can be measured using correlations induced through a Raman interaction of the probe with the out-of-equilibrium material. By scanning the time delay between the noisy probe and a coherent pump pulse (which was used to drive the system out of equilibrium), the authors show how the degree of correlation over many uniquely randomised pulses can provide new information beyond that provided in mean-value experiments.

In this work, the degree of correlation was quantified using the Pearson Correlation—a basic metric of correlation between two independent quantities—and this relatively simple demonstration has indicated the feasibility of new experimental directions in 2D Raman spectroscopy, an area that has received significant interest but has been impeded by experimental challenges. Dr Tollerud stresses: “There is the incredible opportunity to apply this correlation-based approach to many of the non-linear spectroscopy techniques that have been developed within the mean-value based paradigm”. “This is also a nearly unexplored, yet very promising, area from the theory point of view” adds Dr Cavaletto who led the theoretical calculation. Professor Mukamel, one of the most prominent scientists in non-linear spectroscopy, also shares his collaborators’ enthusiasm: “Here we have formalised how to extract time-dependent high-order non-linear signals from intensity correlation functions, rather than mean value, but this is only the first demonstration of an operating principle which could be applied to many other non-equilibrium techniques”.

More broadly, this work demonstrates transient non-linear spectroscopy based on covariance methods and its advantages over mean-value-based approaches. A generalisation of this approach could be a game change in non-linear spectroscopy in the optical region, but also provide a route to retrieve temporal and spectral resolution from stochastic probes, in conditions where noise is unavoidable such as in hard-x-ray free-electron lasers (FELs) based on the self-amplified spontaneous emission (SASE).