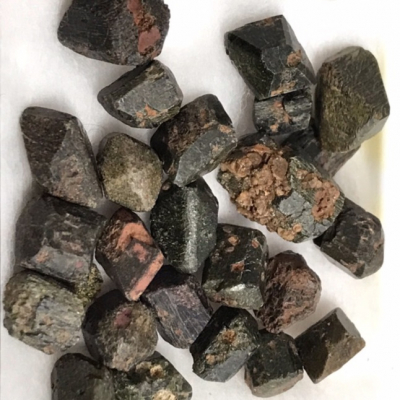 Pyroxenes are a major group of rock-forming silicate minerals that generally contain calcium, magnesium and iron. Given their abundance, elucidating the physical properties of pyroxenes is deemed vital in the study of rocks and minerals. A research group led by Professor Keiji Shinoda from the Graduate School of Science at Osaka Metropolitan University investigated the status of iron ions in monoclinic pyroxenes, a type of calcium-rich pyroxenes, using Mössbauer spectroscopy on thin sections of single crystals. Their study revealed that in pyroxene crystals consisting of roughly 50 % calcium, the tensor that determines the ratios of iron ions at the Mössbauer spectral peaks in the M1 sites—one of two types of cation positions in the pyroxene crystal structure—is independent of the iron content but dependent on the calcium content.

The results of this research have clarified one of the physical properties of pyroxenes. These findings might facilitate detailed future analysis of iron using Mössbauer spectroscopy on mineral flakes.

“We had expected that the tensor that determines the ratios at the Mössbauer spectral peaks would change if the iron solid solution component changed”, explained Professor Shinoda. “However, we were surprised to find that the tensor properties actually varied according to the content of calcium, rather than that of iron. This study’s findings provide practical data for researchers who are conducting detailed analysis of iron by Mössbauer spectroscopy on mineral flakes.”