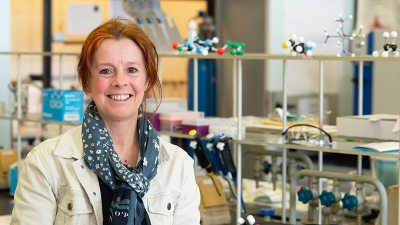 Anne-Sophie Duwez, Professor and Director of the NanoChem Laboratory at the University of Liege has been selected to receive an ERC Advanced Grant from the European Research Council for her ChemForce project. This funding, nearly €2.5M over a period of five years, was awarded to develop research that aims to better understand how mechanical forces and chemistry affect each other by studying the rupture and reformation of basic chemical bonds. A research programme that could find applications in the field of green chemistry and the development of materials with unique mechanical properties.

In 1952, Schrödinger wrote that we would never experiment with a single electron, atom or molecule. Forty years later, methods derived from scanning probe microscopes (SPMs) allowed us to manipulate single atoms and molecules, and even single bonds. Single-molecule force spectroscopy (SMFS), which consists in trapping and stretching a molecule between an atomic force microscopy (AFM) tip and a surface, enables to probe (and/or induce) molecular processes in situ and in real time by the application of mechanical forces. Such experiments have provided unprecedented insights into the structure and function of many biological systems, including DNA, proteins, enzymes, molecular machines etc. The ability to observe one molecule at a time allows us to ask and answer questions that are impossible, or extremely difficult, to address using conventional ensemble techniques.

Anne-Sophie Duwez, Professor of Chemistry and Director of the NanoChem Laboratory (MolSys Research Unit / Faculty of Science) at the University of Liege is one of the researchers working with these advanced techniques. “SMFS has contributed to major advances in biology and biophysics. It has been exploited to a much lesser extent by chemists, mainly in the field of polymers. It remains largely under-exploited in chemistry.” This observation led the researcher to take an interest in the way in which forces and chemistry influence each other. “The mechanics of chemical bonds is still in its infancy and could benefit greatly from SMFS. Major questions that could not been addressed so far, such as the mechanical reversibility of chemical bonds and the lifetime of bonds under mechanical load, could be elucidated. SMFS offers remarkable opportunities to advance our fundamental understanding of chemical bonds. It can also open up avenues for exploiting the ability of mechanical loads to affect chemistry and guide thinking in the design of new materials, reactions and processes, in a framework other than thermodynamics in solution.”

However, the implementation of single-molecule mechanics on small synthetic molecules remains a major challenge due to the very small scale of the processes involved compared to large biological systems. The difficulty comes from the need to develop adequate tools and to prepare suitable molecules that can be interfaced with the device, especially when one wants to probe the reversibility of bonds. “SMFS is very demanding and only a few laboratories in the world have the expertise to design, perform and interpret advanced custom SMFS experiments. Over the past few years, my group has acquired the necessary expertise and developed a series of pioneering approaches in the field of SMFS that now allow us to tackle this big question, which requires a considerable joint effort between synthetic chemists, physical chemists and engineers.”

The ChemForce project aims to broaden the scope of SMFS and adapt it to obtain a detailed picture of the interaction between mechanical forces and chemistry at the single molecule level. “We will overcome one of the major failure of SMFS over the past 25 years, namely the impossibility or extreme difficulty of probing the reformation of bonds after their rupture. To this purpose, we will synthesise and probe a series of molecules containing tethered chemical bonds to study their mechanical stability as a function of their geometry and environment, including the time they can withstand a defined force, and their reversibility (Figure 1). The tethered structure ensures that the components of the bond remain in close proximity after the bond rupture, leaving the possibility of reforming the bond and of studying how mechanical forces and proximity can trigger a chemical reaction.” The five-year project will provide a detailed understanding of how mechanical forces can modify the free energy surface of chemical reactions. This is basic research, but it could have many applications, particularly in the field of mechanochemical synthesis, and could provide the keys to the development of much more effective and better controlled self-healing materials.

Figure 1. Schematic of the general objective of ChemForce. The concept of tethered bonds is shown in the middle section. The partners of the bond remain in close proximity after the bond has been broken open and can rebind. Single-molecule force spectroscopy by AFM (left) or Optical Tweezers (right) is used to monitor the process in various environments (solvent, pH, presence of competing reagents, stimuli, ...). Credit: A.S. Duwez / University of Liège