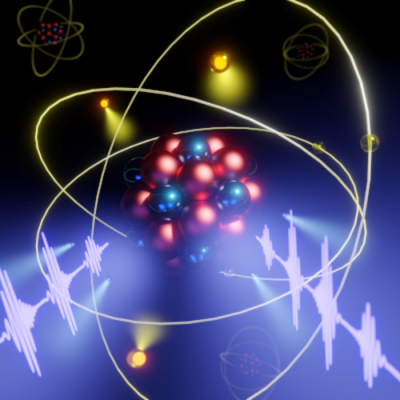 An international team of researchers from the Max Born Institute in Berlin, University College London and ELI-ALPS in Szeged, Hungary, has demonstrated attosecond-pump attosecond-probe spectroscopy to study non-linear multi-photon ionisation of atoms. The obtained results provide insights into one of the most fundamental processes in non-linear optics.

Femtosecond pump-probe spectroscopy has revolutionised the understanding of extremely fast processes. For instance, the dissociation of a molecule can be initiated by a femtosecond laser pump pulse, and can then be observed in real time using a time-delayed femtosecond probe pulse. The probe pulse interrogates the evolving state of the molecule at different time delays, making it possible to record a movie of the molecular dissociation. This powerful technique was awarded with the Nobel Prize in Chemistry in 1999.

As shown in Figure 2, the yield of the doubly-charged Ar2+ ions (red curve) was almost independent of the time delay. In contrast, the yield of the triply-charged Ar3+ ions (blue curve) shows pronounced oscillations when varying the time delay between the two attosecond pulses. The researchers were able to conclude that the multi-photon absorption occurred in three steps: In each of the first two steps a single photon was absorbed, whereas in the third step two photons were absorbed at the same time. These results were confirmed by computer simulations that were carried out at University College London and at ELI ALPS. 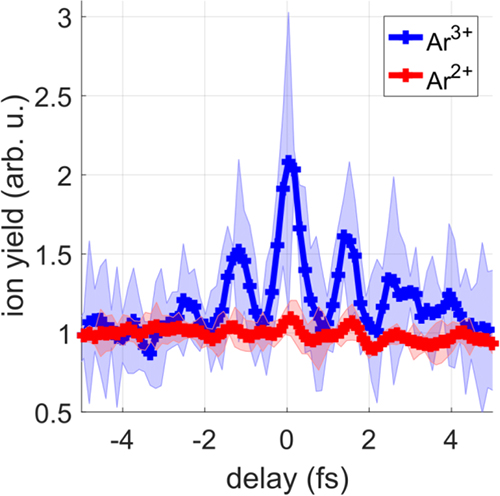 Figure 2. Ar2+ and Ar3+ ion yields as a function of the time delay between two attosecond pulse trains. (a) The Ar2+ ion yield (red curve) is only weakly modulated as a function of the XUV-XUV time delay, whereas clear oscillations with a period of 1.3 fs are observed in the delay-dependent Ar3+ ion yield (blue curve). These results indicate that Ar2+ is generated via the sequential absorption of two photons. Subsequently, two additional photons are simultaneously absorbed to form Ar3+. Credit: MBI

The developed experimental technique can be used in the future to study complex processes not only in atoms, but also in molecules, solids and nanostructures. An exciting question that the researchers hope to answer is how several electrons interact with each other. This could help to understand the most fundamental processes on the shortest timescales.