The nuclear industry and the field of archaeology could hardly be described as “two sides of the same coin”. Perhaps not even the same currency. However, early research suggests that technologies widely used in the nuclear industry could offer valuable support to the non-intrusive identification of buried archaeological features which provide a brand-new insight into historic sites and ways of life.

A collaborative project between the University of Reading and Nuvia Limited is investigating the application of portable gamma radiation survey methods at sites of historical interest, which has to date yielded some interesting results.

The story so far

Gamma radiation surveys at several key locations within the Roman Town of Silchester, Hampshire, UK, was successfully completed1 using Nuvia’s Groundhog® system (Box 1). The site was selected due to the extensive geophysical data already available for the site, against which the radiation survey data could be compared. Further, it was recognised that Silchester offered a range of target types on which to test the Groundhog® system.

Groundhog is a family of proprietary radiation detection systems designed, owned and operated by Nuvia Limited. These systems are well established within the nuclear industry. They are used for detecting and quantifying the nature and extent of radioactive material in support of various tasks including reassurance surveys, site clearance, remediation planning and particle detection. The basic system comprises a sodium iodide detector, gamma spectrometer, GPS system, supporting electronics and hand-held data logger/ultra-mobile PC processing unit.

The system can be scaled to suit the nature and size of the project, with hand-held systems suitable for smaller areas of tens of square metres through to vehicle mounted systems capable of surveying several hectares in a day. Both methods of application are capable of achieving a high density of measurements: >15,000 measurements per day for hand-held systems and >50,000 per day for vehicle mounted system.

Radiation and GPS data are continuously recorded and processed to generate high quality outputs including spectral data and visual outputs that support interpretation of data and rapid identification of areas of interest.

The purpose of this preliminary investigation was to explore whether radiation surveying could form an additional useful “tool” in the toolbox of existing geophysical technologies used in archaeological exploration.

Four areas were surveyed, including areas of urban and industrial activity, a temple complex and an area containing cremations and suspected inhumations. The most exciting results relate to a survey of the Temple Complex at the site. Figure 1 compares the results from a traditional geophysical survey (Figure 1a) against the gamma survey data (Figure 1b) from the same area. The figure shows that the gamma survey was capable of measuring subtle differences in the radiochemical composition of the Temenos (temple) wall bounding the Temple Complex and the surrounding substrate. The feature, which appears as a linear area of depleted radioactivity on the left-hand side of the image, aligns with similar anomaly in the fluxgate gradiometry survey data from the same area, suggesting that this method could indeed support archaeological surveys. 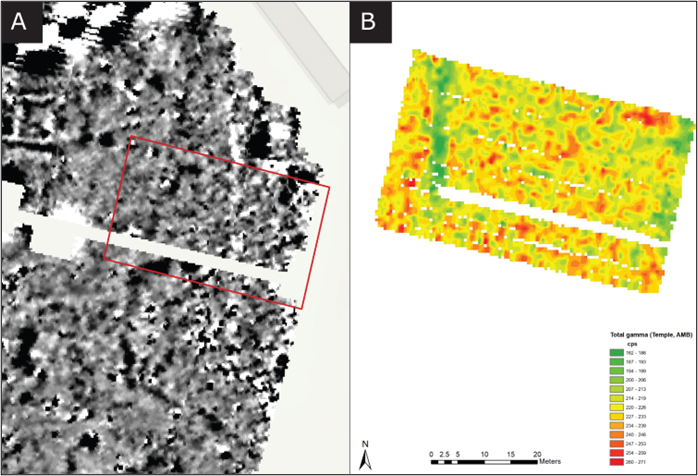 Figure 1. Comparison of fluxgate gradiometry data (±5 nT) (a) against total gamma radiation data (b) collected at the Temple Complex. Uncollimated survey data are displayed in cps. A clear linear anomaly of depleted radioactivity can be seen in the left-hand side of the survey area. This aligns with a feature visible in the fluxgate gradiometry data, which is known to be a Temenos wall. Reproduced from Reference 1 under a CC BY licence. Geophysics data from Reference 2.

Surveys at the other areas targeted at Silchester yielded mixed results. A radiation survey completed at nearby Little London, known to be an area of industrial activity during the Roman period, was able to identify the location of a modern infilled claypit (Figure 2b). Faint linear features present in a section surveyed with the detector in a collimated configuration may be attributable to kilns identified in the geophysical data (Figure 2a). However, this is uncertain and may be attributable to interpolation of the data or a natural occurrence. Radiation surveys at the burial site and area of urban activity did not generate any anomalies as identified in the geophysical data, as had been expected. 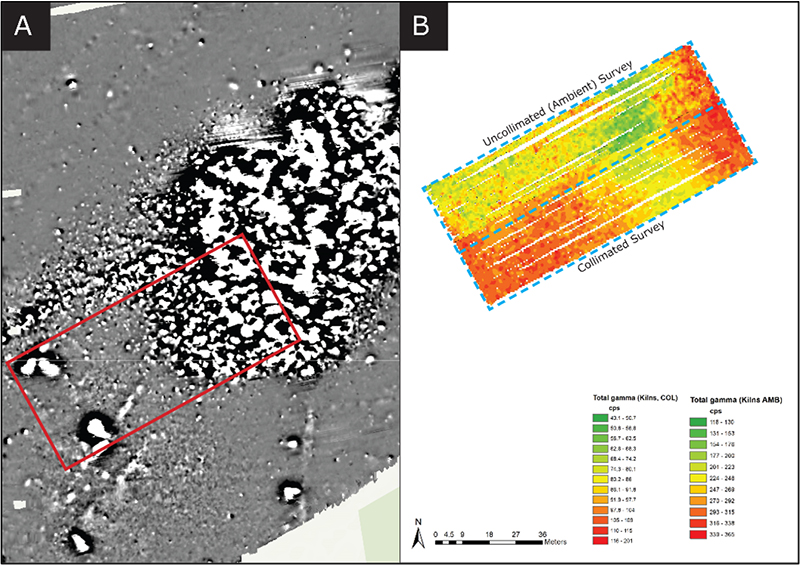 Figure 2. Comparison of caesium magnetometry data (±7 nT) (a) against total gamma radiation data (b) collected at Little London. Both collimated and uncollimated measurements are presented. Radiation data are displayed in cps. An area of depleted radioactivity in the upper half of the Groundhog® survey area aligns with the clear anomaly present in the geophysics data. A “P”-shaped anomaly (arrowed) in the top-left corner of the survey area broadly aligns with one of the kilns but is assumed to be naturally occurring or a feature of interpolation. Reproduced from Reference 1 under a CC BY licence. Geophysics data from Reference 3.

How does radiation surveying work in an archaeological context?

Typical geophysical surveying methods look for and measure differences in the physical properties of potential features of interest and the surrounding substrate. This includes for example magnetism and electrical resistance and dielectric permittivity. Similarly, when completing radiation surveys of archaeological sites, we are looking to measure subtle variations in the concentrations of naturally occurring radioactivity present in potential targets and the surrounding soil. Due to their abundance in Earth’s crust, long half-lives, ability to accumulate within materials of interest and ability to generate gamma rays of sufficient energy and intensity to support gamma ray mapping, this research has identified 40K, 238U and 232Th as the radio­nuclides of interest.

There are multiple mechanisms that can cause measurable differences in the concentrations of radio­activity within targets. These are summarised in Figure 3. Of particular interest in the field of archaeology is the historic use of imported construction materials, and the concentration of radioactivity in these materials. Construction materials have throughout history, been transported over significant distances to a desired location or settlement. This is observed in many iconic historical monuments such as the Welsh blue stones of Stonehenge or the Dorset-sourced marbles of Westminster Abbey. These imported materials typically have a different geochemical composition to the local geology. Where imported materials are present in sufficient quantities, the difference in gamma signatures should be measurable. The process of making construction materials such as brick can also lead to the concentration of naturally occurring radioactivity. For example, following the removal of water, air and other volatile components during the forming and firing of clay bricks. Sufficient accumulation of these bricks could also lead to a measurable difference in radioactivity concentrations. Historic industrial activities such as the mining and processing of ores has been and continues to be a notable source of technologically enhanced naturally occurring radioactive material. Finally, the ability of uranium, in the form of uranyl to exchange with calcium within the apatite structure of bone during fossilisation can also lead to the accumulation of radioactivity within fossilised bone material.

Why could this approach add value to archaeological prospection?

The effectiveness of current geophysical techniques is dependent on the ability to measure clear differences in the physical properties of potential targets and surrounding substrate. This ability can be influenced by several factors including the presence of nearby metallic structures, presence of salt water or a high water-table, local geology and the type of target suspected. In consequence, there is no geophysics panacea. Rather, consideration must be given to the physical and chemical properties of the suspected target(s) and surrounding substrate, target size, amount of overburden and nearby infrastructure to inform optimal selection of an optimal geophysical method for each site. Application of a limited range of contrasting techniques at a site can offer multiple benefits including: mitigating the effects of interference, improving data fidelity and subsequent interpretation.

In consequence, having a “toolbox” of available techniques to apply to a site of archaeological interest can be a useful mechanism for overcoming known vulnerabilities. Current research is, therefore, continuing to explore whether portable gamma radiation surveying could offer a valuable contribution to this toolbox.

It is recognised that this technique has its own set of limitations. For example, at sites where archaeological features are constructed from very local materials offering no contrast in radionuclide composition. It is also acknowledged that any concentrations of naturally occurring radioactive material could be readily shielded by overburden, particularly when present at depths of more than 40–50 cm, or high soil moisture content. Despite this, completion of gamma radiation surveys at archaeological sites would offer unique advantages and limitations that contrast to those observed for more traditional geophysical techniques. For example, gamma surveying techniques will not be susceptible to interference from metallic structures and electrical lines. Further, the spectrometric capability of the system deployed within this research project supports identification of key radionuclides present within features of interest which could support site characterisation.

The results from this preliminary study are exciting and have raised some interesting questions. For example, why clear anomalies were observed at some sites and not others, and how the surveying method could be revised to improve data quality—such as through increasing sampling density. A number of fieldwork exercises are planned in the coming months to trial alternative survey methods and collect additional data through the sampling and analysis of soil and artefacts. This will help us address these questions and better understand what, if any, role radiation surveys could play in archaeological exploration. This work has also highlighted the importance and value of cross-industry knowledge sharing—including the potential for opening up entirely new fields of research.

For more information on the Silchester study, the original paper1 is open access.

Victoria is a Chartered Environmentalist who graduated from Oxford Brookes University with an MSc in Environmental Management in 2006. She then pursued a career with Nuvia as a Radioactive Waste and Environmental Management Consultant, accruing over 15 years’ nuclear industry experience. In this time, she has worked within multi-disciplinary teams for a diverse range of projects in the UK and overseas. In 2018 Victoria embarked on a part-time PhD with the University of Reading. Her research project explores the efficacy of gamma-radiation surveying for detecting artefacts of potential archaeological/palaeontological interest. It has provided a unique opportunity to combine elements of her day job with a life-long interest in natural history.

Are carbon micro-clusters in the Khufu pyramid blocks of organic origin? PIXE and PIGE reveal the construction of Giza’s pyramids
19 July 2021

What developments do you need to work more efficiently?
7 December 2017