Synchrotron infrared (IR) nanospectroscopy has been used for the first time to measure biomolecular changes induced by a drug (amiodarone) within human cells (macrophages) and localised at 100 nm scale, i.e. two orders of magnitude smaller than the IR wavelength used as probe. This was achieved at the Multimode InfraRed Imaging and Micro Spectroscopy (MIRIAM) beamline (B22) at Diamond Light Source, the UK’s national synchrotron facility. This was achieved by an international team made up of researchers from the School of Cancer and Pharmaceutical Science at Kings College London, the Department of Pharmaceutical Technology and Bio-pharmacy at University of Vienna, and the scientists of the MIRIAM B22 beamline at Diamond.

Their recent paper, now published in Analytical Chemistry, is titled “Synchrotron photothermal IR Nanospectroscopy of macrophages drug-induced phospholipidosis”. It outlines the application of Resonance Enhanced infrared Atomic Force Microscopy (RE AFM IR) by Synchrotron Radiation, to interrogate biological matter at the subcellular level, in this case a cellular model of drug-induced phospholipidosis (DIPL). Instead of the traditional method to evaluate DIPL—visual confirmation by electron microscopy of the lipid bodies or the use of fluorescence labelling technique—they used IR broadband illumination by Diamond synchrotron together with AFM detection to achieve both molecular specificity and enhanced spatial resolution needed to localise metabolic changes within the cell. 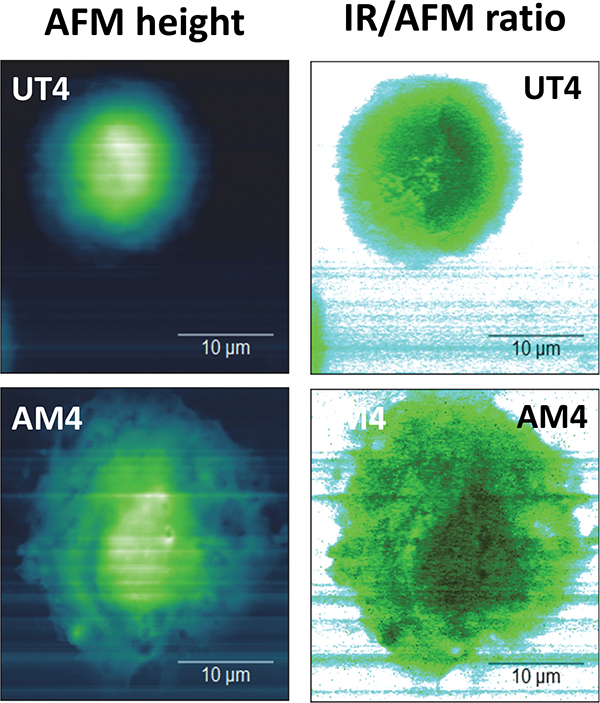 Dr Andrew Chan of King’s College London as principal investigator explains: “The model study based on J774A-1 macrophages exposed/not exposed to amiodarone has clearly demonstrated that RE AFM IR with synchrotron radiation is capable of extracting local molecular information from small organelles within a single cell in a label-free manner. This is remarkable because the determination of lipid content in vacuoles is crucial in the study of DIPL. This will have high impacts on the development of inhaled medicines whereby DIPL is one of the key indications of adverse response from the body to foreign particles.”

AFM topography maps showed amiodarone-treated cells had enlarged cytoplasm, and thin regions of collapsed vesicles. The IR maps of the whole cell were analysed by exploiting the IR overall signal versus AFM-derived cell thickness, also on lateral resolution around 100 nm. Vibrational band assignment of the nanospectra was possible too: all characteristic peaks for lipids, proteins and DNA/RNA were identified. Additionally, both band ratio and unsupervised chemometric analysis of Synchrotron IR nanospectra from the nuclear and perinuclear regions of the cells showed that the cytoplasm of amiodarone-treated cells had significantly elevated band intensities in the regions corresponding to phosphate and carbonyl groups, indicating detection of phospholipid-rich inclusion bodies typical for cells with DIPL. 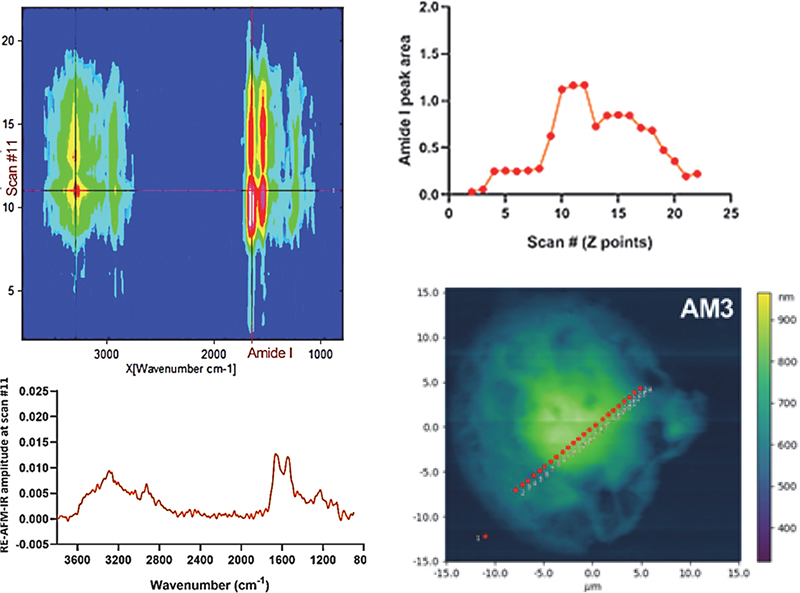 Principle Beamline Scientist at the MIRIAM beamline at Diamond and one of the work’s authors, Dr Gianfelice Cinque comments: “Our experiment is—to my knowledge—a world first by Synchrotron photothermal IR Nano spectroscopy in life sciences, and proved that photothermal IR Nano spectroscopy can successfully scan across mammalian cells and reveal the inner molecular fingerprint via the full IR spectrum, thanks to Synchrotron IR broadband coverage. This achievement has been the conclusion of a long experimental effort by the IR beamline B22 team of Diamond—especially the expert work by Dr Mark Frogley and Dr Ioannis Lekkas.”

Furthermore, Dr Cinque noted that the cell model system and the drug treatment exemplified the method capability by spatially colocalising morphology and biochemistry at subcellular scale. What was remarkable was that the quality of the nanospectra achieved was such that typical vibrational features observed by IR microscopy on biological cells were clearly captured, but for the first time at the nanoscale, providing subcellular biochemical information in a label-free manner.

He went on to explain that the MIRIAM beamline (B22) experience in Synchrotron IR nanospectroscopy—i.e. Synchrotron RE-AFM-IR spectroscopy—offers unique chemical and morphological insight at sub-wavelength or 100 nm resolution across a variety of real-life research especially in soft matter, such as microplastic effect in living tissue, antimicrobial surface phenomena, microfossil and biogeology at submicron scale, organic microelectronics analysis, microcomposite materials and mesostructures.

More research capacity will be offered soon at the MIRIAM beamline B22, as a new nanoIR end station is expected from mid-2021. Beyond the current expertise in Synchrotron IR photothermal Nanospectroscopy, the upgrade will allow new methods (e.g. AFM IR in tapping mode), and crucially complement them with IR scattering scanning optical microscopy (s-SNOM), pushing the spatial resolution even further at the 10s of nanometres scale.