The development of metasurfaces opened a horizon for the advance of planar optics. Among various metadevices, the metalens has attracted widespread attention for practical applications in imaging and spectroscopy, where it allows multifunctional wavefront manipulations for improved focus.

As part of the trend of miniaturisation and integration of photonic systems, metalenses are replacing the traditional refractive lenses made of polished crystals or polymers. But their functions remain static. The prospect of realising active metalenses has motivated the introduction of materials with special properties, such as switchable bifocals or discrete focal lengths. Until recently, dynamic manipulation of metalenses, especially tuneable chromatic dispersion, has remained out of reach.

Metalenses are plagued by chromatic aberration: the failure to focus all colours to the same point. Overcoming chromatic aberration is a vital concern for improved resolution in full-colour and hyperspectral imaging. On the contrary, for spectrographic analysis and tomographic applications, chromatic dispersion helps to separate focal spots for different frequencies, to avoid crosstalk. The ability to manipulate chromatic dispersion dynamically with a single metalens would promote system integration and functional versatility.

A research team from Nanjing University recently demonstrated active manipulation of chromatic dispersion, achieving achromatic focusing within a designated broadband. As reported in Advanced Photonics, the team integrated a photo-patterned liquid crystal into a dielectric metasurface. In their design, the metasurface generates a linear-resonant phase dispersion, which means that the phase front of the transmitted wave is delayed linearly by the dielectric metasurface. The liquid crystal (LC) is responsible for generating frequency-independent geometric phase modulation. 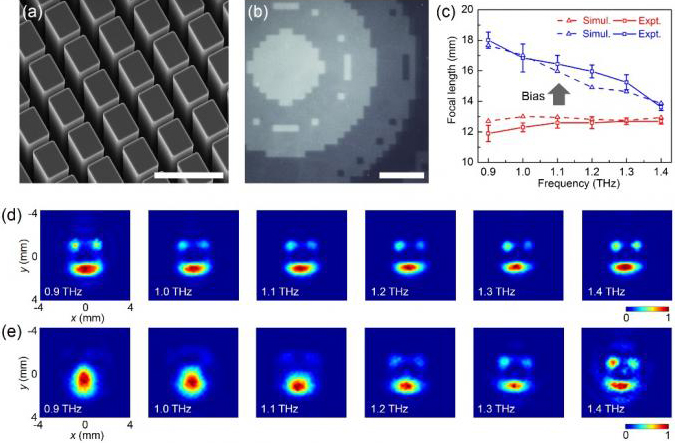 Structural and THz far-field characterizations of the LC integrated metalens. (a) SEM micrograph of the partial dielectric metasurface. (b) Micrograph of the partial photo-patterned LCs under crossed polarisers. Scale bars in (a) and (b) indicate 100 µm and 500 μm, respectively. (c) Simulated and measured focal lengths of the metalens from 0.9 THz to 1.4 THz with/without a saturated bias (75 Vrms). (d) Imaging of a “smiling face” mask using this metalens at bias OFF state. The image is clearly revealed within the designed broadband due to the achromatic focusing. (e) Imaging of the same mask with a saturated bias on LCs. The distortion at lower frequencies is due to the deviation of focal length from the achromatic one. Image courtesy of Zhixiong Shen et al., Nanjing University.

The team verified the chromatic aberration control of the combined lens and demonstrated a significant dynamic broadband imaging contrast effect. The design can be extended to other active metadevices; as an example, the team presented a beam deflector with controllable dispersion. “Combining the flexibility of metadevices with the broadband electro-optical characteristics of liquid crystals makes the design competent for wavefront control from the visible wavelengths to the THz and microwaves”, remarked senior author Prof. Yanqing Lu, of the College of Engineering and Applied Sciences at Nanjing University.

Lu’s colleague at the College of Engineering and Applied Sciences, fellow senior author Prof. Wei Hu notes, “we anticipate that liquid crystal integrated metadevices will give birth to a variety of active planar photonic elements to enhance the functional flexibility of optical systems”.