Kerr gate Raman helps in the preservation of zeolite catalysts Methanol is a clean energy option that can be produced from natural gas, coal and a number of renewable resources including biomass, landfill gas and industrial emissions—in fact, methanol was originally only produced from biomass and was called “wood alcohol”. While methanol is an easily handled combustible liquid, its energy density is only half that of gasoline, so, in the 1970s, a technique was developed that allows methanol to be converted into gasoline.

Because methanol is a simple hydrocarbon made up of just a single carbon molecule, catalysts are used to spur the chemical reactions needed to turn those single molecules into the complex chains of carbon that make up high-energy hydrocarbon fuels like gasoline. One of the most commonly used catalysts are zeolites, which are microporous, crystalline structure made up of silicon, aluminium and oxygen molecules that form a framework of pores. The size of the pores dictates the hydrocarbon produced at the end of the reaction—small pores result in light hydrocarbons, medium pores result in gasoline components. 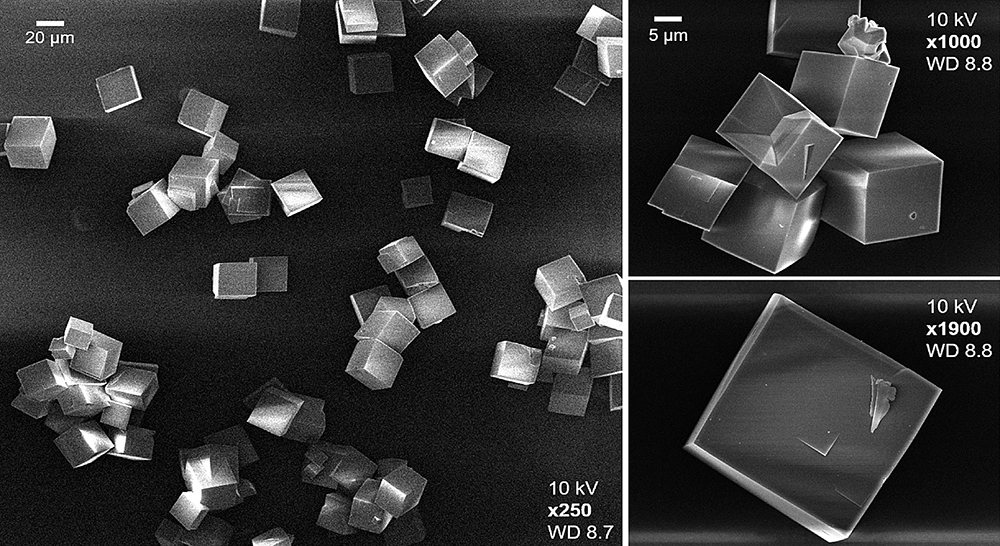 Although zeolites are effective catalysts, their pores have a nasty habit of getting “gummed up” and blocked with heavy hydrocarbons that get trapped within them. This causes the catalyst to become less efficient and eventually to deactivate altogether. At this point, the zeolite must be replaced or reactivated through an expensive, energy-intensive and relatively dirty industrial process that effectively burns away whatever is gumming up the works. These zeolites are of high value to industry and discovering why zeolites deactivate and precisely when the process starts is of great interest to scientists and to industry.

Using Kerr gated Raman spectroscopy the team were able to track all the stages of the reaction and watch as progressively longer chains of hydrocarbons were formed. In doing so, they were able to identify what sort of hydrocarbon was being formed at the moment the catalyst started to deactivate. In the past, it had been thought that a species of hydrocarbon called polycyclic aromatics (polyaromatics) were the main deactivating agents, but the new research has shown that this is not the case. In fact, shortly before the polyaromatics are formed, another species called polyenes are formed and it is these that are present at the moment the catalyst started to deactivate. This was a completely new and unexpected discovery.

“I think that this will change the way people think about how these materials deactivate because, as soon as you know who the culprits are, you are able to design a strategy”, said team-leader Professor Andy Beale of University College London.

There is a huge energy cost, as well as time cost, associated with reactivating catalysts frequently, so anything that can keep catalysts doing their job for longer will save money, energy and reduce the environmental impact—resulting in greener fuels. The study could be significant for industry especially as methanol can be produced from biomass stocks, meaning that gasoline may not have to come from fossil fuel stocks in the future.

The project is an ongoing collaboration between the Central Laser Facility, University College London, Ghent University and the Catalysis Hub—a consortia created with the aim of establishing a world-leading programme of catalytic science in the UK. The findings have been published in Nature Materials.

CLF’s Professor Mike Towrie said: “Kerr Gate Raman is remarkable because it makes it possible to detect tiny Raman signals from zeolite reactions that would otherwise be lost in a sea of fluorescence noise. The Ultra Laser Facility at the CLF allowed us to achieve a signal quality approximately 100 times better than if we’d used standard Raman. For me, this work has been exciting because it demonstrates the potential of Kerr Gate Raman to help answer many more questions in catalysis and in other areas such as battery science.”